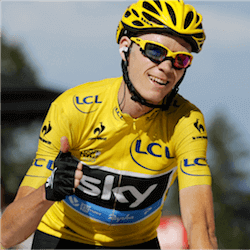 British cyclist and reigning Tour de France champion, Chris Froome was involved in a hit-and-run incident in France but managed to escape unhurt. The British Sky Team rider had his training bike written off after an impatient and dangerous driver deliberately knocked him off during one of his training rides. The three times Tour de France Champion tweeted a picture of his mangled training bike saying that he had been deliberately forced off the road.

While the bike may not have survived the ordeal, Froome said that he was okay after the incident and was able to continue with his training near his home in the South of France. Froome apparently reported the incident to the police. The British cyclist immediately turned to social media saying that he was rammed on purpose by an impatient driver who actually followed him onto the pavement, hit him and kept going. He reiterated that he was okay but that his bike was totalled.

In a brief statement, Team Sky said that the Monaco-based rider was able to continue with his training session after returning home to pick up a spare bike. Froome is currently in the middle of training for the upcoming Criterium du Dauphine. This is a familiar warm-up event for many cyclists competing in the Tour De France a few weeks later. Froome is currently the favourite to win the Tour de France for the third successive year.

The shocking road rage incident was a stark reminder of the perils faced by professional cyclists on a daily basis when training from major competitions. The incident occurred just weeks after former Giro d’Italia winner Michele Scarponi was killed by a vehicle while training in Italy. Scarponi’s death was a major blow for the cycling world. Team Astana described his death as a tragedy that was far too big to be written.

Aged 31, Chris Froome is the winner of the past two Tour de France races. Last year, he became the first man to achieve back-to-back victories at the event since the Spaniard Miguel Indurain achieved the seemingly impossible feat. His first Tour de France win came in 2013. The Team Sky cyclist has an impressive record with wins at the Tour de Romandie and the Criteruim du Dauphine. He also placed second at the Vuelta a Espana.