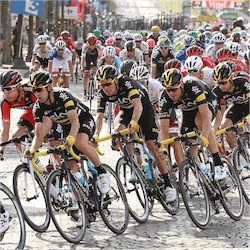 The Trek-Segafredo team suffered a blow just four days before the 104th Tour de France is due to start, when it was announced that Portuguese cyclist Andre Cardoso had tested positive for EPO, the banned blood-booster, after an out-of-competition test on 18 June. As a result, the 32-year-old has been banned from the 2017 race.

The loss could prove quite serious for Trek. Their star rider, Alberto Contador, is fourth-favourite in the betting to take the yellow jersey this year, at $16.00. Cardoso, who would have been riding in his first Tour, is a specialist climber, and he was meant to be helping Contador over the steeper mountain stages.

Saturday’s start in Dusseldorf will instead see Spanish veteran Haimar Zubeldia replace Cardoso in the Trek team. Zubeldia, 40, is also a specialist climber, who has five Top-10 finishes in the Tour. His best was a fourth place in 2007, and he finished 16th last year.

Defending 2016 champion Chris Froome, riding for Team Sky, is the favourite to take back-to-back victories. The British rider is currently being offered at $1.63 to win, but that isn’t to say Team Sky don’t have concerns about the 2017 route. This year’s race has a record low number of kilometres devoted to time trials, and only two really high summit finishes along its course.

Those are the traditional areas of the race in which the top riders make up time in the general classification, so Froome and his teammates have been working on different strategies to put him ahead without the help of time trials and summit finishes. Team Sky sporting director Nicolas Portal is naturally playing his cards close to his chest, but he has indicated that the team are ready to pull some surprise moves.

Australia is well represented among the various Tour de France teams, compared to the USA’s three riders and New Zealand’s four. There are nine Aussie cyclists competing, with Tasmanian Richie Porte the most prominent. Porte, riding for BMC Racing, is second favourite to take the yellow jersey at this point, with odds of around $2.40.

Colombia’s Nairo Quintana could also be a contender. Bookies are offering him at around $7.00.