Vuelta Ahead for Chuffed Matthews 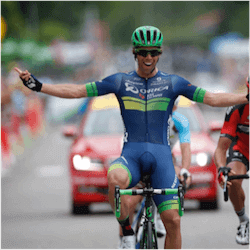 Although he has held the Points Classification jersey and/or the Mountain Leader jersey in all three of cycling’s grand tours: the Giro d’Italia, the Tour de France and the Vuelta a Espana, this is the first time the Team Sunweb rider has won a classification outright. As one of Australia’s great all-round cyclists, unafraid to attack in sprints, climbs and time trials, the 26-year-old Canberran will be a major challenger in the year’s next grand tour: the Vuelta next month.

The Vuelta a Espana was first held in 1935. This year marks the 72nd edition of the race, and for only the third time in history, it will start in France. Stage 1 on 19 August is a 13.8km team time trial in Nimes on the Riviera, followed by a flat Stage 2 to Gruissan on France’s south-west Mediterranean coast.

The 2017 Vuelta only enters Spain on Stage 4; mountainous Stage 3 takes riders via the Pyrenees into Andorra, and Stage 4 is a flat 193km ride that finally crosses the Spanish border into Tarragona. There are eight hilly stages, another four mountainous stages, four more flat stages and an individual time trial scattered over the 21-stage event, along with only two rest days.

Riders to Watch in the Vuelta

Matthews may not be ready for a yellow jersey yet, although punters who think he is, will be able to get good odds on him taking an outright win in the Vuelta. He’s definitely in contention for another sterling performance in the Points Classification, and betting fans should wager accordingly.

Froome has finished second in the General Classification at the Vuelta three times: in 2011, 2014 and 2016. Following his triumph at the Tour de France earlier last week, he’s likely to be at quite short odds to win the Spanish race as well.

But punters shouldn’t rule out Trek-Segafredo’s Alberto Contador, either. The Spaniard will be on home ground, and he’s won the Vuelta outright three times: in 2008, 2012 and 2014. After a disappointing ninth-place finish in the 2017 Tour de France, he will be fiercely motivated.