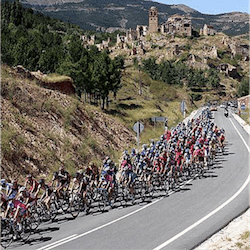 Contador to Retire after Vuelta a Espana

When Spanish cyclist Alberto Contador first won the Vuelta a Espana in 2008, he completed a magic 15-month feat, becoming the youngest and quickest rider ever to win all three Grand Tours. He won the Tour de France in 2007, followed by the Giro d’Italia earlier in 2008, so the third win on home turf propelled him to heights that only five other cyclists have reached in history.

It’s perhaps fitting, therefore, that that he will be ending his professional career back on home ground, in the race that first thrust him to international prominence in the sport. El Pistolero, as his fans call the attacking mountain specialist, announced his decision recently on social media, saying he will retire from professional cycling after the 2017 Vuelta, which starts next Saturday.

Casualty of the Doping Scandal

Contador now has a record of seven Grand Tour overall victories, so a GC win at this year’s Vuelta will see him retire on eight; tied in third place in the record books with French 60s star Jacques Anquetil. If his 2010 and 2011 victories had not been erased after he tested positive for the banned steroid clenbuterol, he’d be aiming to equal Bernard Hinault’s second place in the Grand Tour winning record on 10, although Eddie Merckx’s record of 11 Grand Tours remains safe.

Many ardent Contador fans reckon he got a bum rap on the doping charges. To this day, he insists the clenbuterol was accidentally introduced into his system by something he ate; Basque beef was fingered as the culprit. But from 2008-2010 he also rode for Kazakhstan’s Team Astana, which was refused entry to the 2008 Tour de France because of notorious doping.

It’s possible he was a victim of the crackdown from 2010-12, when in the wake of the massive investigations into illegal stimulants in cycling, even Lance Armstrong’s reputation didn’t escape unscathed. It was not a climate in which anyone could be given the benefit of the doubt.

Whatever Contador’s level of complicity, however, he took his suspension without a murmur and returned to racing with a triumphant Vuelta win in 2012. He is third favourite, at $5.00-$10.00, to win the race again this year. You can bet on the riders and the race online, or on your mobile, at Crownbet, where you’ll find great odds and a wide variety of markets.