Vuelta a Espana Is up for Grabs

Matthews Will Skip the Vuelta a Espana 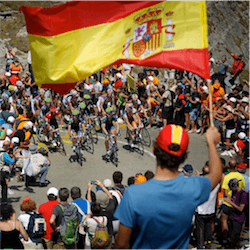 Cycling fans hoping that Australia’s 2017 Tour de France hero, green jersey winner Michael Matthews, would shoot for a thrilling double at the Vuelta a Espana in a fortnight, have been disappointed. A mere week after his Points Classification triumph, the Aussie all-rounder was back in action at the Surrey-London Cycling Classic, a one-day race over 183km, but his legs gave out and he finished third for the second year in a row.

The 26-year-old has admitted the Tour took a lot out of him, and he is now resting for a spell, which means he’ll skip the gruelling Vuelta, totalling more than 3.200km over 21 stages, only eight of them flat. That hasn’t affected the betting action, however.

2016 Vuelta winner Nairo Quintana has elected not to defend the title; after taking on both the Giro d’Italia and the Tour de France this year, and finishing second in the Tour General Classification with only one high mountain stage win to his name, he also needs a break. As a result, there are a number of riders punters might want to consider at the top of the betting.

Froome the Odds-On Favourite for Vuelta

Following his third consecutive Tour de France win, and his fourth overall, British rider Chris Froome is the favourite for the Spanish race, which starts with a team time trial in Nimes, France, on 19 August. The Team Sky champion is odds-on at most betting sites, at between $0.70 and $0.80. You can get you bets in online at CrownBet and see whether you can predict a winner.

However, as Quintana has already proven, two Grand Tours in a row is a supreme challenge, so Froome might be biting off more than he can chew in the quest for his first Vuelta, after finishing as runner-up last year. Italian Team Bahrain-Merida rider Vincenzo Nibali is right behind the Brit in the betting, at $3.50-$5.00.

Punters should also consider Alberto Contador, at around $8.00. The Spaniard will be riding for Trek-Segafredo on home turf, and hungry to improve on his ninth-place Tour de France finish. Russia’s Ilnur Akarin, at around $12.00 for Team Katusha-Alpecin, and Italian Team Astana leader Fabio Aru, at around $14.00, could also prove worthwhile.