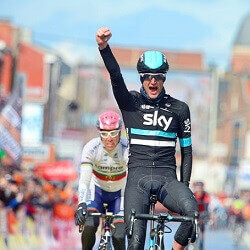 Team Sky’s Wout Poels stage 4 victory in the Paris-Nice race has given him a 15 second lead. He won the 4th stage time trial, putting himself at the front of the pack for when the riders hit the road again. Interestingly, Poel is not known for doing well in time trials, but this time he made use of the uphill stretch in the first section and pushed to the front. He managed to stay in font and set the fastest time, pushing past Marc Soler with an 11 second gap, and past Julian Alaphilippe with 16 seconds to spare.

Luis Leon Sanchez is still in the lead and holding on to the yellow jersey in the Paris-Nice race, but his lead has now been cut down to a mere 15 seconds after Poel excelled in stage 4. Poels is now in second place and has pushed Arnaud Démare out, and the team Groupama FDJ has a long way to come back now as is currently in 47th place.

Stage 4 of Paris-Nice saw the riders all face a rolling time trial that extended across 18.5km. The trial had a steady climb into Saint-Héand, and thereafter it was relatively flat, with a downhill finish in Saint-Étienne. The conditions were overcast and cool, which made for good riding weather, but the occasional shower added a few challenges, those of which Poel seemed happy to rise to, and work his way to the top spot. How he fares in the next stages remains to be seen, as there are several hilly sections that pose difficulty to many riders.