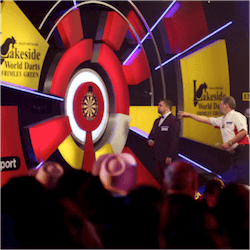 The 2018 BDO World Darts Championship kicked off at England’s Lakeside Country Club in Frimley Green, Surrey on Saturday. Australian betting fans watching via satellite of live streaming must be feeling some kindred spirit whenever they see crowd shots: these are fans who know how to party.

That shouldn’t surprise anyone, of course. Darts was born as a pub sport, and until quite recently, was one of the few sports in which competitors could drink and smoke while playing; something which no doubt still applies in the non-televised echelons of the game.

So its no wonder that fans at the BDO World Darts Championship are adept at pushing the boat out; drinking large quantities of lager is simply a darts tradition. So, apparently, is singing along lustily to the music of the 70s, with Agadoo, Hey Baby and Sweet Caroline proving almost as popular as Tom Jones’ Delilah.

Over-the-Top Fancy Dress a Must

Then there are the costumes. Fancy dress is another tradition for BDO World Darts Championship attendees, and so far this year we’ve seen multiple Donald Trumps slugging it out with a riot of Kim Jong-uns, several Smurfs, and a few nuns with a terrible five-o’clock-shadow problem.

There’s also been Beetlejuice, Ghostbusters, Ron and Hermione from Hogwarts, a couple of wax crayons, a walking dartboard, various members of The Simpsons family, and some ‘superheroes’ who really weren’t built for lycra…

And in between all the revelry among the spectators, there’s also a lot of world-class darts happening. English reigning champion and tournament top seed Glen Durrant had no trouble in his best-of-5 opening match against fellow Englishman Gary Robson, taking an easy 3-0 win.

The first upset came when Scottish fifth seed Ross Montgomery was ousted by England’s Scott Waites, who took a 3-1 Round 1 win. Although unseeded, Waites has won this tournament twice before, in 2013 and 2016, so he could be the outsider to back.

Two other Englishmen, namely second seed Mark McGeeney and fourth seed Scott Mitchell, also came through their Round 1 matches unscathed, although it took them both all five legs to do so.