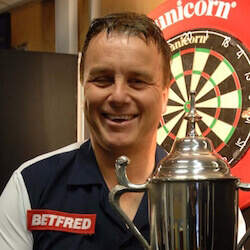 The 2018 British Darts Organisation (BDO) World Darts Championship will be held for the 33rd year running at the Lakeside Country Club in Surrey, England, from January 6-14. It will be the 40th World Championship since the tournament was inaugurated in 1978.

The BDO World Darts Championship also delivered arguably the most memorable upset in the sport’s history. In 1983, unknown qualifier Keith Deller defied bookies, opponents and all but a few bold punters, when he beat the three top darts stars of the day to win the title.

Only 23 at the time, Deller claimed the first of his three prize scalps in the quarter-finals. He faced former world Number 1 John Lowe, who at that stage already had 17 successful years under his belt and was still ranked world No. 3. Lowe won the championship in 1979, and would do so again in 1987 and 1993. In 1983, however, he went down 4-3 to Deller.

In the semis, Deller met then-world No. 2 ‘Jocky’ Wilson, defending the championship he’d won in 1982, after turning pro only in 1979. He would win it again in 1989 and make the quarter-finals eight times overall, but in the 1983 semis, Deller trumped him 5-3.

In the final, Deller faced Lowe’s and Wilson’s biggest rival: Eric Bristow, at the time ranked world Number 1. He’d already won the BDO World Darts Championship twice at that point, and would eventually go on to establish an all-time record of five BDO World Championships and five World Masters.

In the 1983 final, however, Bristow made a fatal mistake. At 5 sets all, Deller left himself with a checkout of 138 to win, when Bristow was already sitting pretty on a checkout of 50. Instead of trying to take the tricky bullseye to win on a double, Bristow threw a single 18 to leave himself an easier double 16 to win.

He never got the chance: Deller stepped up and threw treble 20, treble 18 and double 12 to snatch the title 6-5, becoming one of the youngest players, and the first qualifier, ever to do so. It was his crowning achievement in a career that faded fast thereafter, but he did give darts the phrase “the Deller checkout”, used whenever a player needs 138 to win.