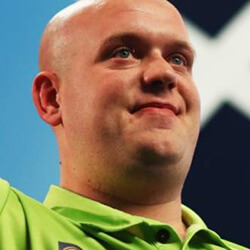 World number one Michael van Gerwen has stated that he hasn’t had his best year, but feels that there is more to come as he looks to win the third PDC World Darts Championship. The Dutch player is once again the favourite to take the trophy at the 16-day event, which will begin at the Alexandria Palace in London.

Van Gerwen won 19 events in 2018 after he lost to champion Rob Cross during last year’s semi-final. But the 29-year old has lost in his last four televised competition that followed from his World Grand Prix win earlier this year in October.

Talking to reporters, van Gerwen said that he had been a bit unlucky, but that the had to finish better for the upcoming event, which he was working on, adding that he feels good and he’s not playing too badly. He continued saying that he’s not had his best year, but has still won more titles than any other player, but compared to previous years, 2018 has been  one of his worse, and that he feels many people expect a lot from him. He finished his statement saying that he has high standards, and that he wants to play well in every upcoming match.

Van Gerwen is set to play against either Raymond Smith or Alan Tabern in the second round of this year’s event, which is taking place 25 years after the first PDC World Championship.