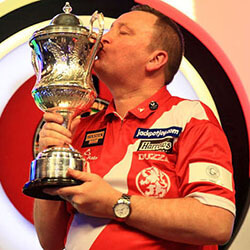 Reigning BDO World Champion Glen Durrant managed to move into the quarter-finals of the 2019 tournament after beating compatriot Scott Baker with a 4-3 victory.

Durrant, who is a Lakeside winner for both 2017 and 2018, claimed the opening three sets, before Baker took the other three. But Durrant’s 3-1 deciding set saw him best his opponent, thanks mostly to a double 12 that Durrant shot.

Scott Mitchell, a former BDO world champion himself, also advanced into the last eight due to a 4-0 victory over Polish Krzystof Kciuk. Mitchell, who is six seeded, is now set to face third seeded Welshman Jim Williams, while Durrant will be taking on Northern Irishman Kyle McKinstry, who previously beat Canadian David Cameron 4-3.

In the women’s event, top seeded Lorraine Winstanley has reached the semi-finals thanks to a 2-0 win over Trina Gulliver, a 10-time winner. Winstanley will next play against Anastasia Dobromyslova, the runner up from 2018, after the Russian claimed victory over fifth seeded Aileen de Graaf 2-0. Maria O’Brien, who is currently unseeded, earned a 2-0 quarter-final win against sixth seeded Fallon Sherrock. This marks the second time that O’Brien has beaten after beating three-time runner-up Deta Hedmen during round on.