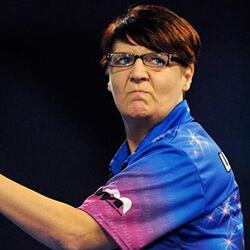 Ashton was hoping to become the first woman to beat a man at the World Championship, but after Ashton’s opening set, which she took, the Dutchman quickly regained his composure to take the win 3-1. Ashton began the game on a high note, earning 140 from her last three darts, and finished the opening leg with 110 checkout. She was unable to maintain the scoring, and Dekker took five legs in a row to to 2-1 lead. The 28-year-old Ashton looked uncomfortable throughout the match, but has nevertheless managed to earn a second round match with former semi-finals player Mervyn King.

Elsewhere, reigning champion Rob Cross had to put extra effort in before winning the opening match for the event. The 28-year-old from Kent lost his first set before managing to get past rising Dutch star Jeffrey de Zwaan 3-1. This is another win for Cross, who won last year’s title for his debut entry into the championship.

The expansion of this season’s worlds has led to two guaranteed spots for female players with Russian Anastasia Dobromyslova and Ashton. Dobromyslova previously played in the prelim round in 2009, and who will be starting her current campaign against Ryan Joyce, hoping to make it through the qualifying match and earn a name for herself.