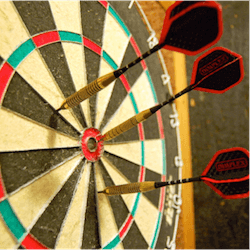 The Alexandra Palace in North London dates back to 1873. Its greatest claim to fame is as the site of the first broadcast high-definition television service, inaugurated by the BBC in 1936. The redeveloped heritage site includes a Victorian theatre, a bar and TV studio facilities.

This combination makes it spiritually and practically perfect for the TV spectacle that is the 2018 PDC World Darts Championship, set to keep punters around the world entertained for two-and-a-half weeks from December 14 to January 1.

25 Years Since Historic Split in Darts

The 2018 championship is the 25th presented by the Professional Darts Corporation, which split from the British Darts Organisation in 1993. The two have presented their own separate world darts championship every year ever since, and the fact that both are still going says something interesting about the sporting revenue pie.

When darts first started getting TV coverage in the mid 1970s, it was still the epitome of its British pub-culture roots. TV satire shows even poked fun at its ‘sport’ designation, given that the players could knock back drinks and puff on cigarettes throughout their matches.

By the 1980s, however, when darts was one of the most popular sports on television, the social and political climate began to shift. Vices like alcohol and tobacco shifted from a matter of personal choice to a public health issue; darts was forced to ‘clean up’ to remain TV-friendly, and viewership started to drop off, along with revenue.

Growing dissatisfaction among the world’s top players over their lack of say in darts, declining revenues, and other money issues — like the BDO forcing them to wear BDO sponsors’ shirts for no fee, instead of their own sponsored gear in tournaments — came to a head in 1993.

The last straw was a 1992 VHS video the BDO released of World Championship highlights, from which the players involved received no royalties. The players’ revolted and split to form a rival darts organisation.

The matter was only settled legally in 1997, creating the separate BDO and PDC circuits, both under the jurisdiction of the World Darts Federation. This year’s 25th anniversary is a timely reminder that the sports revenue pie is big enough to go around, if split fairly between owners, broadcasters and players.

And thanks to online sports betting these days, the punters can also hope for a slice…