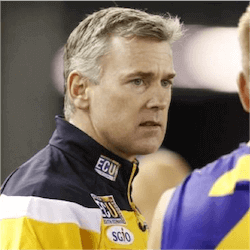 West Coast Eagles Not Quite Making It Out Of The Nest

It was true for 2014 and its proving to be true for 2017 too – a spot in the finals seems increasingly more unlikely for the West Coast Eagles.  This all the more so after an embarrassing defeat by Collingwood on the weekend, a loss labelled by many as disgraceful.  More than anything else, it all seems to come down to the choices of one man, maybe two:  West Coach Eagles coach Adam Simpson – with more than a little help from manager Craig Vozzo.

2017 is proving to be a blueprint of 2014 – resulting in a serious call for Simpson’s head.  Simpson, however, is having none of it – saying that he’s up for the fight and optimistic about the future.  But many are asking: what future?  After having been prodded by the media as to whether he had any concerns about his future with the Eagles, he responded that work security was the farthest thing from his mind at this stage.

In spite of all the hoo-ha and calling for Simpson’s head, it must be considered that his record doesn’t reflect all that bad when compared with those of predecessors Mick Malthouse and John Worsfold.  In fact, Simpson even holds his own with Hawthorn’s Alistair and Luke Beveridge from the Bulldogs.

What then, is the real problem, if not coaching?  It all seems to point in the direction of the general management itself.  Football journalist Greg Denham has been calling out the elephant in the room:  the lack of regeneration.  Since 2012 the AFL has seen mass development of younger players, with more than 150 rising star nominations taking place within its ranks.  How many of these were from the camp of West Coast Eagles?  Two.

Management seems set on sticking with older players, much to the detriment of the team.  A number of cuts will have to be considered if things are to change for the better – the names of no less than 12 players have come up, including Jonathan Giles, Paddy Brophy and Simon Turnbridge.

Simpson remains hopeful as far as salvaging the finals situation is concerned, but has conceded that the not-fast-enough-not-fit-enough problem will probably persist for the rest of this year.