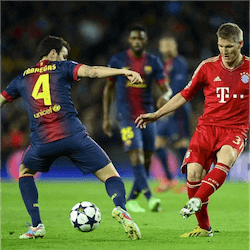 Arsenal Out of UEFA Champions League

Australia’s UEFA Champions League supporters, along with Arsenal fans worldwide, were stunned by Tuesday’s Round of 16 clash with Bayern Munich. The Gunners went into the match at Emirates Stadium carrying a four-goal deficit, after losing to the German side 5-1 in the first leg of the tie.

Agonisingly for fans and punters, despite a superb first goal from Theo Walcott in the 20th minute, Arsenal’s night fell apart in the second half, and they finished 5-1 down again.

In a controversial decision, ref Anastasios Sidiropoulos upgraded the yellow card he had shown the Gunners’ French defender Laurent Koscielny for a penalty-area foul on Robert Lewandowski to a red card, after he decided that Koscielny had made no attempt to play the ball.

Lewandowski’s penalty equaliser made the deficit 6-2 and sealed Arsenal’s fate: down to 10 men in the 53rd minute, Arsene Wenger’s men seemed to give up. Bayern proceeded to score four goals in 17 minutes, including a double from Arturo Vidal, ending Arsenal’s 2016-17 Champions League.

FC Barcelona supporters were as delirious as the Arsenal punters were gutted after Wednesday’s match at the Nou Camp.

Paris St Germain won the first match of their Round of 16 tie 4-0 on 14 February. No side had ever come back to win a UEFA Champions League knockout tie from a four-goal deficit, so the Spanish fans may not have been optimistic at the start of the match.

Barca started well, a third-minute goal from Luis Suarez and an own-goal gift from Layvin Kurzawa sending them into half-time 2-0 up. The stadium erupted when Lionel Messi’s penalty went home in the first five minutes of the second half; at 3-0, the historic comeback was in sight.

A PSG goal from Edinson Cavani in the 62nd minute looked like it had killed Barca’s hopes, but then the unimaginable happened within the last six minutes. A goal and a successful penalty from Neymar, plus a final chip in by substitute Roberto off a free kick in stoppage time, and the Spanish side finished 6-1 up, with a 6-5 goal surplus overall, and are through to the final eight.