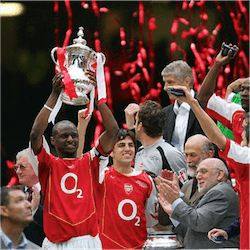 It seems Arsene Wenger’s turbulent year with Arsenal has ended with success. The Gunners picked up their third FA Cup Final win in four seasons after beating Chelsea 2-1 at Wembley Stadium. In denying the English Premier League champion a chance at a double, Wegner became the competitions most successful manager. In his 21-year reign, he has led his side to no less than seven FA Cup titles, a result that has covered some of the cracks of their Premier League shortfalls.

As the FA Cup season reached its climax, Arsenal managed to deliver a brilliant display of power and class against a side that has dominated the premier league. Their good fortune could not have come at a better time. With 90 000 fans in attendance, Arsenal and most importantly Wenger, were able to bring their fans some sort of compensation for their Champions League woes. It took just four minutes for the action to get started when Alexis Sanchez found the back of the net.

Initially the goal was disallowed by the referee’s assistant due to Aaron Ramsey interfering with play while being offside. However, Anthony Taylor overturned the decision and awarded Arsenal the goal. Their good fortune remained when Chelsea were reduced to 10 men when Victor Moses received a second yellow card for the game. Chelsea managed to weather the storm though and equalised in the 76th minute with Diego Costa chesting a brilliant cross and slotting the ball past David Ospina.

Wenger Back for Two More Years

Just three minutes later, Arsenal was back on top. This time it was Ramsey who did the honours. Left unmarked, Ramsey met Oliver Giroud’s failed pass by Kante, who somehow failed to track the midfielder. As he did in 2014, Ramsey slotted home the winner, giving the Gunners their 13th title. Arsenal now head into the offseason slightly adrift. They are officially out of the Champions league after ending up with a fifth-place finish in the Premier League.

While fans debated about Wenger’s future, it seems the 67-year-old Frenchman will be around for another two years. A board meeting was held on Tuesday to discuss whether the FA Cup victory would influence the decision. As it turns out, Arsenal has decided to offer the Frenchman a 2-year contract to extend his stay with the side. In a statement released to the press, the club explained that their ambition was to win trophies. According to them Arsene Wenger is the man to do it.