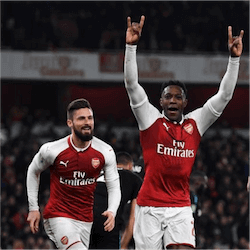 Arsenal fans have been in a strop since January 6, so the English football side’s 2-1 home win against London rivals Chelsea in the second leg of their Carabao Cup semi-final on Wednesday will hopefully have cheered them up a bit. The first leg, at Stamford Bridge on January 10, ended in a goalless draw.

The two sides started the second leg looking pretty evenly matched, but then Chelsea went one up seven minutes in. A lovely pass from Pedro Roderiguez allowed Eden Hazard to break into the box and put it away in the bottom corner of the net.

Arsenal were lucky with their 12th-minute equaliser. If it weren’t for a deflection off Chelsea’s Antonio Rudiger, Nacho Monreal’s header may never have found goal. The Blues were dealt a further blow by the loss of Willian to injury in the 30th minute.

Arsenal finally got the winner in the second half, 15 minutes in, when Granit Xhaka picked up a deflected cross from Alexandre Lacazette, and popped it over the line from up close. Despite some spirited attempts from Chelsea and one close call in the 76th minute, the Gunners stayed impenetrable in defence for the final 30 minutes to seal the victory.

Facing Manchester City in the Final

Their 2-1 aggregate score for both semi-final legs puts Arsenal through to the final of the Carabao Cup, or EFL Cup as it was known before the energy drink sponsor came on board. The final is a single-match event, scheduled for Wembley Stadium on February 25.

The Gunners will be facing Manchester City, coming off wins in both legs of their semi-final. The Manchester side beat Bristol City 2-1 at home, and then on Tuesday night clinched the semi-final with a 3-2 win in Bristol.

Manchester City, of course, also still have their 2018 FA Cup hopes alive – they play Cardiff City in their next knockout round on Sunday, January 28. Arsenal fans, on the other hand, will really be hoping their team can take the Carabao Cup at least this year, after their shock exit from the FA Cup three weeks ago.

On January 6, the Gunners played their FA Cup Third Round match against Nottingham Forest, and were favourites to win it. Instead, Forest revived their championship form with a 4-2 win in a match full of incident on and off the pitch, leaving Arsenal more in need of the Carabao Cup win than ever.