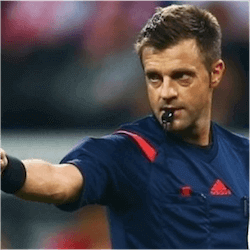 With Real Madrid and Juventus through to the 2017 Champions League final after some exciting semi-finals action, Australian soccer fans are following the latest UEFA news as they weigh up online betting options. Last week, UEFA announced the match officials for the 3 June clash in Cardiff, Wales.

A lawyer by profession, Dr Brych has a PhD in law specialising in sport, and has been an international football ref since 2007. He is ranked as a UEFA Elite group referee, and has presided over five Champions League matches so far this season. Those included Juventus’ Round of 16 first leg against Porto, which the Italians won 2-0.

According to the odds, the smart money is on Real Madrid to win the Champions League final, but it’s a close-run thing, so they could be wrong. Online betting sites are currently offering around $1.60 on the Spanish club taking the championship, while a Juventus win will net around $2.00.

A draw is currently priced at around $2.50, but it looks highly unlikely. Real fans already expect Portuguese star Ronaldo to give them the edge during regular match time; if it goes to penalties, he will be even more dangerous.

Juventus goalie Gianluigi Buffon has delivered extraordinary service to his team this season: throughout 990 minutes of football in the 2017 UEFA Champions League, he’s let in only three goals.

In Cardiff, he will focus on that record, rather than the fact that Ronaldo has scored against him every time the two clubs have met with Buffon in goal: three times in two matches during the 2013-14 group stage, and once again in each of the 2014-15 semi-final legs.

Ronaldo also has 10 goals in the tournament, only one behind Barcelona’s Lionel Messi. He will be doing his utmost to snatch the top goal-scorer spot in the final, while securing the championship for his team.