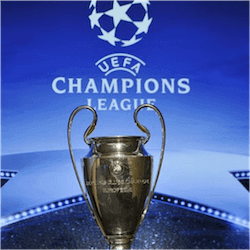 Australia’s European football followers have the UEFA Champions League quarter-finals to punt on this week. After repeat 5-1 thrashings of Arsenal to make the final eight, Bayern Munich is the side the bookies think most likely to win the championship this year, at odds of $3.00.

The German aces will play their first leg of the QFs at home against Real Madrid on Wednesday. With the Spaniards priced at $5.50 to win the tournament, Bayern looks like the smart bet in this match.

However, Barcelona is another Spanish giant that could well go all the way, after their historic six-goal comeback to oust PSG from the final eight. They’re the tournament second-favourite at $3.75, so they should have the edge in Tuesday’s first leg against Juventus. The Italian side’s odds of being champions are currently at $11.00.

Leicester City is arguably the weakest team left in the tournament, although their Champions League performance has at least been better than their English title defence this year. They are outsiders to win the title at $40.00, so most of the smart money is going to be on Atletico Madrid, currently at $6.00, in the other first leg on Wednesday.

The last remaining French side in the tournament, at odds of $14.00, is Monaco. They compete in Tuesday’s other first leg against Borussia Dortmund, offered at $8.00. The German outfit will probably attract the bulk of the betting in this QF, but Monaco has been scoring freely throughout this year’s competition, so they could well deliver an upset.

Nothing is carved in stone, of course. Surprise defeats and astounding comebacks have been quite a feature in the 2017 UEFA Champions League, and there is no reason that pattern could not recur during the final rounds. On current form, however, the teams that look like a solid bet to make the semis are Bayern, Barcelona and Atletico Madrid.