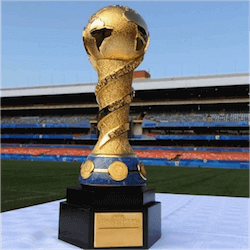 Germany has had yet another setback to their Confederations Cup bid after Julian Weigl fractured his ankle. Weigl joins three other German players who are out of the Confederations Cup due to injuries. They may even be joined by a 5th player, winger Marco Reus.

Julian Weigl is on the German international squad but plays for local team, Borussia Dortmund. The 21 year old player only made it 22 minutes into the game before he was taken off the field with a fractured right ankle.

The match was against Augsburg and ended in a 1-1 draw. The loss of Weigl who plays defensive midfield is a huge blow for an already limping German team.

A Big Loss For Borussia Dortmund

The confederations Cup is set to kick off next month in Russia but it seems Weigl will be out for 3 to 4 months. Coach Thomas Tuchel has stated that it is not easy to replace Julian. He says Julian’s speed and skill is what gave the team an edge and he cannot be replaced.

It is not just Julian’s Confederations Cup appearance that is on the line; he will also be missing the German Cup final at the end of May where they will be playing against Eintracht Frankfurt.

Additionally he will also be out for Borussia Dortmund’s final Bundesliga match against Werder Bremen.

The Growing Rank Of Injured

Benedikt Hoewedes, Manuel Neuer and Mario Goetze also joins Julian Weigl on the injured or absentee list. They may also be joined by winger Marco Reus who also plays for Borussia Dortmund, due to previous injuries he sustained this season.

Russia To Host This Years Cup

This year’s Confederations Cup will be held in Russia between the 17th of June and the 2nd of July. Traditionally the confederations cup is hosted in the country that will host the FIFA World Cup the following year.

Russia automatically qualifies as a member of the finals as they are the host city. They will be joined by Australia, Chile, Mexico, New Zealand, Portugal, Cameroon and of course, Germany.

Brazil Not To Appear This Year

2017 will be one of the few years that Brazil has not featured. They have been the most successful Confederation Cup team with 4 trophy wins under their belt.