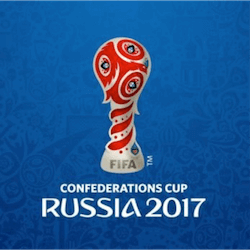 That left the top spot in the OFC open for New Zealand to take, and as a result both sides are in the tournament for the first time ever. They will face six other teams: Russia, Germany and Portugal from UEFA, Cameroon from CAF, Mexico from CONCACAF and Chile from CONMEBOL.

The Confederations Cup action will be spread across four Russian cities: Moscow, St Petersburg, Kazan and Sochi, and the hosts are pulling out all the stops to display their readiness for next year’s World Cup. Moscow’s Confederations Cup Park has been set up in one of the city’s most popular entertainment districts, the Muzeon Park of Arts.

It is already drawing fans, more than a month before the tournament start, to take selfies with the trophy or view the various football-related exhibits. Robokeeper, the unbeatable robot goalie, is attracting the biggest crowds.

The eight teams in the Confederations Cup are divided into two pools in the opening stages of the competition. Australia is in Group B, with Cameroon, Chile and current World Cup champions Germany.

So the Aussies face a tough start, and it will take a few big upsets for them to make it beyond the pool stages into the knockout rounds. If they do manage that feat, of course, they are going to reward punters who back them handsomely.