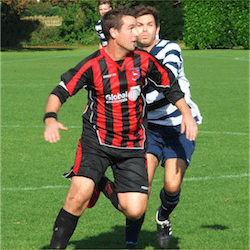 When the final whistle blew at the BTC Cup semi-final, Lee Hawkins surely rejoiced as he had almost single-handedly secured Cookham Dean’s position in the BTC Senior Cup final at the Madejski Stadium by scoring two of three goals for a final score of 3-2 against Woodcote Stoke Row. Cookham Dean were flying high in the first half of the game when they almost scored twice with a header by Jack Chance and another with Scott Jackson’s shot, but things took a turn for the controversial when Josh Waldron of Woodcote appeared to be fouled. Play was allowed to continue and Woodcote saw a chance to redeem themselves when Jake Dillon sailed a goal past Dean’s goalkeeper Nick Bovingdon to score their first goal of two.

However, in contrast to their 3-1 defeat by Reading YMCA in the Maidenhead Norfolkian Senior Cup final on Monday 3rd April, Cookham Dean refused to surrender after Woodcote scored. Even though Cookham Dean’s win seemed to be secured at the Maidenhead Norfolkian Senior Cup Final, player complacency on Dean’s part was blamed for their Reading YMCA defeat, and the team were not about to repeat their same mistakes.

After Jake Dillon scored for Woodcote Stoke Row, Cookham Dean presumably felt the pressure of Maidenhead Norfolkian Senior Cup history repeating itself and the match started to heat up substantially in the final minutes. The Woodcote goalkeeper managed to block a goal attempt by Scott Jackson, and Dean’s Paul Sharpe set the ball wide just after goal play-through. However, Cookham Dean’s fate was not sealed just yet, as in the final minutes before Woodcote could begin celebrating, a goal-bound ball was blocked on the line by a Woodcote hand resulting in a penalty. Cookham Dean saw possible glory in their future when Lee Hawkins found the back of the net with only 5 minutes of game play to spare. Extra time was allotted to the match and Hawkins summoned an exhilarating second goal for Cookham Dean by turning and finishing just inside the box.  Woodcote had been diminished to only 10 players by this stage, and Kai Murphy Douglas secured the win for Cookham Dean with their third goal. To Woodcote’s credit they did manage to score a second goal on a free kick, but it was too little too late.