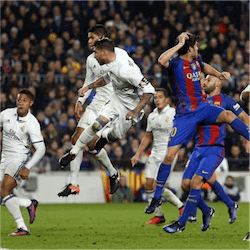 Spain’s 2017-18 La Liga only got going two weeks ago, and now fans face a week’s hiatus. Not that Aussie sports betting enthusiasts will mind; league football is on hold all over the world this week, as players report for duty in their national sides for 2018 FIFA World Cup qualifiers, so there is no shortage of soccer action to bet on. La Liga matches resume of Friday, 8 September.

Basque Country side Real Sociedad is at the top of the Spanish table, for what that’s worth this early in the season. The San Sebastian team beat Celta Vigo 3-2 in the first round, followed by a 3-0 thumping of Villarreal on Friday. However, they’re only at the top of the table by virtue of their goals-scored tally; Barcelona and Leganes are also on 6 points after two wins.

Defending champions Real Madrid are currently lying fifth, although with one win and one draw, they are equal on 4 points to Atletico Madrid, lying fourth on goal difference, as well as Girona, Levante, Valencia, Sevilla and Athletic Bilbao.

Nevertheless, Real Madrid is the current favourite in the betting to retain their La Liga crown this year, at odds of between $0.66 and $0.80. They beat Deportivo 3-0 in the first round, but they will have been disappointed by their draw at home on Sunday. Despite the prodigious talents of Marco Asensio for Real, Valencia were organised and effective on attack, and the scores were level at 2-2 when the full-time whistle blew.

Matches to Watch Next Week

After the World Cup qualifiers hiatus, Leganes gets La Liga restarted next Friday, playing at home to Getafe. Leganes, a small-town club on the outskirts of Madrid, only qualified for La Liga for the first time in the 2015-16 season, so their fans will be hoping fervently that they can retain their place near the top of the ladder as the tournament progresses.

Real Madrid play Levante at home next Saturday. The Valencian side are currently right behind Real and Girona in seventh on the ladder, but the home team are favourites to beat them, at odds of $0.10 versus $40.00.

Punters looking for more evenly matched sides to put a bet on should consider next Saturday’s clash between Valencia and Atletico Madrid: Valencia are at $2.60, with Atletico at $1.20.