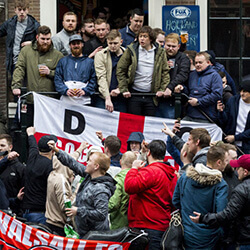 Deputy Chief Constable and NPCC lead for football policing Mark Roberts stated that this had caused them a considerable setback as far as helping Russian police understand the dynamics of English football supporters. Roberts went on to say that this sort of behaviour did not just increase risk for those responsible, but for genuine supporters as well.  The NPCC trying to persuade the Russians that most fans don’t cause problems has all been for nothing.

A goal by Jesse Lingard gave the English football team their first victory over the Netherlands since the Euro back in 1996, and ended a run of seven meetings so far without a win. But the friendly match was marred when Dutch riot police had to detain 60 people in Amsterdam’s red light district, and this after 25 supporters were held on Thursday, too.

A number of English supporters in the stands booed when the Dutch national anthem was played before the game’s kick-off, prompting Gareth Southgate, manager for the national English team, to call fans’ behaviour intolerable.

Roberts stated that countries were viewing this kind of behaviour and asking themselves why they should tolerate hooligans. He went on to say that if the host country found this sort of behaviour offensive, they had the right to deal with it as they would were it occurring with their own people.