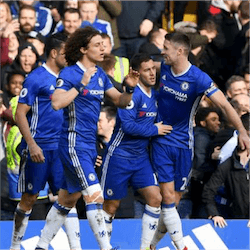 English football has supporters worldwide, and Australia’s Tottenham Hotspur fans were rejoicing after Chelsea’s defeat last Saturday. Spurs beat Burnley 2-0 to take their points total to 62, and Chelsea’s shock 2-1 loss to Crystal Palace left them on 69, just seven points ahead of their London arch-rivals.

It looked as if the mid-week matches might allow Tottenham to close the gap even further, but their 3-1 victory away against Swansea City on Wednesday was matched by Chelsea’s 2-1 win at home to Manchester City. On 72 and 65, they remain separated by seven points.

Liverpool could also be challenging for second or first place on the ladder in the final seven weeks, with 60 points from 17 wins keeping them within striking distance. However, the Reds have played 31 matches, compared to Chelsea, Spurs and Man City’s 30 each.

City is breathing down Liverpool’s neck with 58 points, so with a game in hand they have a good shot of leapfrogging the Scousers into third place.

Chelsea faces several sides that shouldn’t trouble them unduly in the final seven weeks of the EPL: Middlesborough, Sunderland, West Brom and Southampton, for instance. Spurs, the Reds and Man City will thus have an uphill battle trying to crowbar the Fulham side out of the top spot.

But the current top four are not invulnerable, either. Manchester United and Arsenal are tied at fifth on the log, with 54 each, and both have also played just 29 games at the time of writing. So they have time to squeeze past some of the sides ahead of them in the coming weeks.

With that in mind, there are a few matches Australia’s online soccer betting fans will be particularly interested in. The Chelsea vs Man U match at Old Trafford on Sunday, 16 April, is sure to be a nail-biter, as will the Manchester derby with City at home to United on Thursday, 27 April.

Depending on other results in upcoming weeks, the Arsenal vs Spurs match at White Hart Lane on Sunday, 30 April should also be intense, with more fireworks a week later, when the Gunners are at home to United.