Epic Sporting Wins and Highlights from 2016 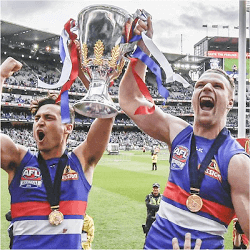 For every bit of sad and shocking news to grace the headlines in 2016, the was also a remarkable story of heroic and sometimes downright miraculous sporting feat to boot. While the world mourned the loss of Muhammad Ali and the ill-fated Brazilian football team, there have been times when sport has united the world with a feeling of surprise and elation with the birth of new sporting legends.

One of the biggest stories of the year was the drama that unfolded in Leicester. The underdog team with a loveable loser of a manger completely stunned the sporting world, winning the English Premiership league. There was no denying that it was unbelievable moment filled with magic that rippled through every part of the world.

In Australia, just about every AFL fan apart from the Swans supporters watched in delighted disbelief as the Western Bulldogs played their way through a series of unlikely finals. Toppling giants as they went, the Melbourne scrappers took out the mighty Swans in the final to claim the premiership for the first time in 139 years.

While not exactly an underdog story, the tremendous win for the Firebirds in the trans-Tasman netball final is certainly one game everyone will remember. Playing against the mighty Swifts, the Queenslanders needed every second of time to edge out their rivals. With the game going into double extra time, the Firebirds were finally able to claim the win with the entire team in tears.

However, when it comes to epic celebrations, nobody does it quite like the Argentinians. While some people think they went a bit overboard, most of the world too busy jumping up and down to notice. After claiming their first ever Davis Cup title, the Argentinian team lead by Juan Martin Del Potro showed the world exactly what they were made of. Despite battling with a career threatening injury, Del Porto staged one of best comebacks of the year against Croatia to claim the title having already lost out four previous occasions.

In the US, the Chicago Cups pulled off one of the most unlikely sporting feats of the year. Deemed America’s biggest losers in Major League Baseball, the Cubs endured decades of ridicule and mockery before finally breaking the curse.  After scraping through a heart-stopping seven games, the team beat the Cleveland Indians to win the World Series and reduce the sporting community to tears.