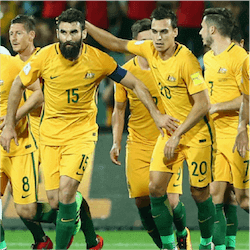 Australia’s soccer fans will still be focused on the English Premier League semi-finals for the FA Cup, but looking ahead, they can enjoy some top football live in Melbourne, come June. The Victorian government and the FFA have confirmed that Brazil will play a friendly against the Socceroos at the MCG on 13 June.

Four days beforehand, the five-time World Cup Champions will face perennial rivals Argentina, currently No. 1 on the FIFA world rankings, in another friendly at the MCG. It looks certain to be a memorable week for Victorian football fans and Australia’s online betting community.

With FC Barcelona looking very unlikely for this year’s UEFA Champions League, some of the club’s stars should be free to play for their national teams: namely Messi and Mascherano for Argentina, and Neymar and Rafinha for Brazil. As a result, the clash between the South American giants promises to be a humdinger.

Australia will be Between Two Important Tournaments

The Brazil/Australia match, on the other hand, is set to be a massive challenge for the Socceroos, currently 50 spots behind World No. 2 Brazil on the FIFA ladder. Most local fans would be happy to see the national side put on a better show than the 2013 team; the last Australian side to meet Brazil, and one that got slaughtered 6-0.

However, head coach Ange Postecoglou will probably use the friendly as a handy warm-up for the Socceroos’ next opponents: World No. 3 Germany, in the upcoming round of the Confederations Cup starting on 19 June in Sochi, Russia.

As the Asian champions, Australia qualified for the eight-team Confed Cup, and is drawn in Group B. Cameroon and Chile make up the rest of the group, and neither will be a pushover.

The Socceroos also have an important qualifier for the 2018 FIFA World Cup against Saudi Arabia at the Adelaide Oval on 08 June. The Brazil friendly should therefore allow them a second, stronger opponent against which to test their skills and strategy, before the team leaves for Russia.