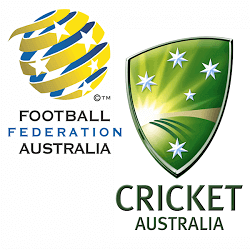 The results from the study included indoor cricket and school players into the final numbers. However, as many people pointed out, these figures conflicted with research findings from Roy Morgan. According to Roy Morgan, Swimming was the nation’s most popular sporting activity with cycling in second place followed by football. It seemed that cricket was much lower down the order at number 8 on the list.

This week it was Football Federation Australia who are boasting new figures with soccer holding the top spot as Australia’s most popular sport. A recent AusPlay survey commissioned by the Australian Sports Commission concluded that over 1.08 million Australians had officially signed up with a soccer club in the last year. The figure puts Soccer firmly at the top of the table at least 400 000 people ahead of golf in second spot.

According to the data, the AFL recorded 50 000 fewer players than golf with netball and tennis even lower down the order. Cricket was holding the sixth spot on the table with a total of 562 000 people active at club level. The numbers suggest the only half the number of cricket players cited by Cricket Australia actually go ahead and sign up with a cricket club.

FFA CEO, David Gallop admitted that the AusPlay report made soccer officially the number one sport for Australians. He went on to explain that the sport has gained in popularity due to the fact that it is the most inclusive and accessible for both adults and children. Football is deemed to be one of the biggest global sports carrying the highest profile players as well as the world biggest sporting event, the FIFA World Cup.

According to the AusPlay report, football holds top spot with 4.5% of the population taking part. Golf is next in line with 2.8% followed by Australian Football at 2.6%. Netball is also high on the list at 2.6% followed by tennis on 2.4% and cricket on 2.3 %. Rugby league sits at the lower end with Athletics being the least popular of the reviewed sports.