A Good Start For Barcelona At Preseason Opener 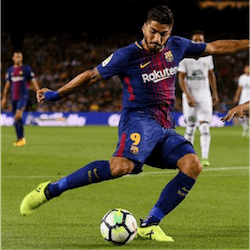 If ever there was an opportunity for Gerard Deulofeu to make his case as Neymar’s replacement, it was during Barcelona’s huge win over Chapecoense at Camp Nau. The former Everton star played a convincing role in their 5-0 win over the visitors at the pre-season ‘Gamper Trophy’ friendly. Having been brought back to the club this summer season, Deulofeu will be well aware that the club is currently in talks with Ousmane Dembele.

It has to be said that Deulofeu did more than his fair share, starring alongside Luis Suarez and Lionel Messi with an inspired performance. The Spanish winger played an excellent defensive game and backed it up with two assists and a goal to help Barcelona cruise to an easy win against an emotionally charged Chapecoense side. Suarez, Messi, Sergio Busquets and Denis Suarez were also on hand to add to the score line.

For Chapecoense fans, it was an emotion night. It was just over seven months ago that a plane crash claimed the lives of 71 people including most of the Chapecoense football staff as the team flew to face Atletico Nacional de Medellin in the Copa Sudamericana. Only three Chapecoense players survived the crash and were applauded for their commitment to the game.

Goals from Messi, Suarez and Busquets

It was as stark reminder that that the game of football has never been more important than the lives of the players. For their part, Barcelona presented their player line-up one by one before the mach. Messi was an obvious crowd favourite and proved his worth claiming the third goal from an assist by Deulofeu. The starting line-up for Barcelona was also significant in terms of those who were not present.

Two big players that were out due to injury included Thomas Vermaelen and Andre Gomes. Vermaelen is the only player in the squad so far that has not been given a shirt number. Meanwhile Gomes is likely on his way to Liverpool as part of the big Coutinho deal. Sergio Roberto was another big name missing from the line-up. According to reports, Barcelona is willing to let Roberto leave the club if someone was able to meet his buy-out clause.

The second half saw the addition of two more goals, with Suarez cracking in number 4 after back-and-forth passing with Messi. It was also the Argentinian who played Denis Suarez who made it 5-0. Paco Alcacer had the opportunity to make it 6-0 after being awarded a penalty, but was denied Nelson Semendo.