A History of the College Rose Bowl 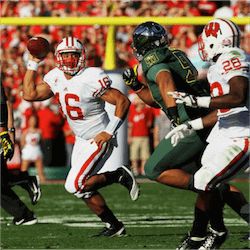 Back to College Rose Bowl Beginnings

Pasadena’s Rose Bowl game is more than just one of the semi-finals in the annual College Football Playoff. The oldest post-season bowl in US college gridiron, it’s a testament to 116 years of California history, and a tradition that has started the New Year with a top-level college football clash through 104 editions.

Of those 104 editions, 103 Rose Bowls have been consecutive since 1916, and all have revelled in the formal name ‘the Pasadena Tournament of Roses’. The first game, played in 1902, was a sporty addition to Pasadena’s annual Battle of the Flowers. Begun in 1890, the Battle of the Flowers established the yearly Rose Parade and its familiar caravan of flower-bedecked floats.

The 1902 game featured the Michigan Wolverines versus the Stanford Cardinal, in which the Wolverines performed a 49-0 evisceration of the California team. After that inaugural game, however, football was omitted from the Rose Parade festivities for 13 years.

After more than a decade experimenting with chariot races and other outlandish amusements to headline their annual Tournament of Roses, the Pasadena organisers decided to install college football as the permanent capper to the festival; a feature that soon became a revered tradition.

Since 2016, the Rose Bowl has served as the finale to every Pasadena Tournament of Roses, bar one. The Rose Bowl Stadium opened in 1922, and the game has been played there every year from 1923; again, with one exception.

That exception was in 1942, shortly after the bombing of Pearl Harbour. Authorities, having realised (presumably) that after attacking US ships, aircraft and military installations, the Japanese would rank football next on their list of strategic priorities, moved the game to Durham, North Carolina.

By 1947, the opponents for the Rose Bowl had been formalised, bringing together the champion teams from the Midwest’s Big Ten against the Pacific Coast conferences that would become the Pacific-12. From there, the annual game evolved into the semi-final of the College Football Playoff Championship.