A Look At The Champions League Semi-Finals 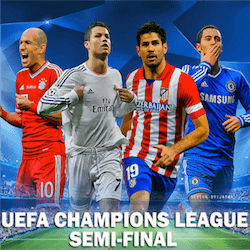 In the world of football the UEFA Champions League is considered to be one of the most prestigious football tournaments in the world. Organised by the Union of European Football Associations (UEFA), the Champions League dates back to the 1950’s when it was known as the European Cup. In 1992, the competition converted to its current format allowing multiple entrants from European countries where each team competes in a round-robin format.

Prior to 1992, the European Cup was played as a straight knockout tournament only open to the Champion clubs from each country being represented. The changeover to the group-stage round-robin format meant that clubs that finished runner-up could also have a crack at the Championship. The League competition begins in July each year and contains three knockout qualifying rounds and a play-off round. The 10 teams that survive the knockout round enter the group stage where they join the 22 teams who qualified in advance.

The 32 teams are then split into 8 groups of 4 teams. The teams within each group play each other in a double round-robin competition. The eight group winners and runners up then proceed to the knockout phase which all culminates in the UEFA Final which is played in May. The winning team automatically qualifies for the FIFA World Cup.

Real Madrid and Atlético back in Action

The 2016 Champions league final was played at the San Siro in Milan, Italy. The final saw Atlético Madrid take on Real Madrid. The teams were evenly matched and were locked at one-all after extra time. The match came down to penalties with Real Madrid taking the title with a successful 5-3 penalty win.

This year, the first leg of the quarter finals will see Juventus taking on Barcelona in Turin while Dortmund take on Monaco in Dortmund. The second leg of the quarterfinals will take place on the 18th of April with Leicester taking on Atlético Madrid and Bayern facing off against the defending Champions Real Madrid.

The semi-final paring will be determined by an open draw. The first leg will take place on the 21st of April while the second leg will take place on the 2nd of May. The UEFA Championship Final will be held at the National Stadium of Wales in Cardiff on the 3rd of June. With the last year’s finalists still in the running, we could see a repeat of the 2016 final in Wales.