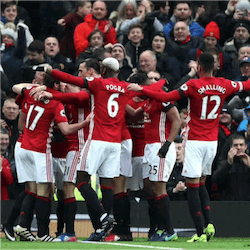 Australia’s Manchester United fans got a treat on Thursday, when the English team won their second Europa League quarter-final tie against Anderlecht 2-1 at Old Trafford. After a 1-1 draw in their first tie in Belgium, it was enough to put Man U through to the semis.

For the Red Devils, the win has significance beyond the 2016-17 UEFA Europa League. Out of the running for the FA Cup and currently down at fifth on the English Premier League ladder, United can automatically qualify for the 2017-18 UEFA Champions League if they win the Europa League finals.

Thursday’s match was uneven, with a strong start for the home side, when Henrikh Mkhitaryan scored 10 minutes in. However, Sofiane Hanni put away an equaliser off a rebound in the 32nd minute to bring Anderlecht level.

United missed several chances in the second half, and at full time the aggregate scores were still tied at 2-2. Marcus Rashford scored the decider in extra time, leaving Man U the 21/20 favourites to win the cup.

At 13/5, Lyon is currently second favourite with the bookies to take the championship. The French side beat Besiktas 2-1 at home in the first tie, but the Istanbul rematch saw the Turkish side win 2-1, and the aggregate score remain tied after extra time. The tie was broken by a penalty shootout, which Lyon won 7-6.

Ajax are also a team that might attract attention from Aussie punters in the semis. They won their home QF tie against Schalke 04 comfortably enough, 2-0. In the rematch, however, two goals for Schalke within the first three minutes of the second half, then a third 30 minutes later, put the Dutch team’s semis berth in jeopardy.

Nick Viergiver managed a goal just before full time that brought the aggregate score level again, before a final score from Amin Younes in extra time put Ajax through. Punters can currently get odds of 7/1 on them winning the tournament.

Celta Vigo is the fourth team in the semi-finals. After beating Belgian side Genk 3-2 in the first tie at home, Vigo were content with a one-all draw away on Thursday night. They’re being offered at 6/1 to win the 2016-17 Europa League.