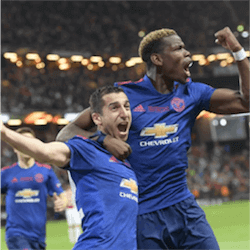 It has been an emotional week for Manchester United and their fans. Following the horrific suicide bombing at the Manchester Arena on Sunday night, the team was in a subdued mood in the build-up to Wednesday’s UEFA Europa League Final clash against Ajax in Stockholm’s Friends Arena.

The bombing, targeting mainly children at an Ariana Grande concert, killed 20 people and left more than 100 injured. With the team in shock following the news, the Red Devils’ management decided to cancel Wednesday’s pre-match press conference. The match went ahead, however, with the English side buoyed up by a vocal and supportive crowd.

If anything, the atrocity only made United more determined to carry on as normal, and they simply outclassed their opponents with a goal in each half. The Dutch side couldn’t manage a goal in reply, so Jose Mourinho’s men ended the match 2-0 victors, and in possession of their first Europa League championship.

Pogba and Mkhitaryan Seal It

The Red Devils’ first goal came just 18 minutes into the match, thanks to an Ajax throw-in. United won the ball, and the surprise deflection, by Davinson Sanchez, of Paul Pogba’s subsequent shot saw Ajax goalie Andre Onana completely wrong-footed as the ball hit the back of the net.

Not to be outdone by the Frenchman, Armenian midfielder Henrikh Mkhitaryan put the Red Devils 2-0 up early in the second half with a dazzling flick-in off a corner. Ajax, fielding the youngest starting line-up ever to play a European final, could not make use of the speed that made them so effective against Olympique Lyonnais in the first leg of their semi. They were hemmed in and nullified by the United defence, despite having lots of ball in the second half.

Apart from securing the one trophy missing from their cabinet, Manchester United’s Europa win brought a ray of defiant hope to their mourning city. Fans can also take comfort from the fact that the Europa cup means that United qualify automatically for the 2018 UEFA Champions League.

That’s still a year away, however. For now, the UEFA action Australia’s soccer fans will be punting on is this Saturday’s FA Cup Final between Arsenal and Chelsea, and the 2017 UEFA Champions League Final between Real Madrid and Juventus on 3 June.