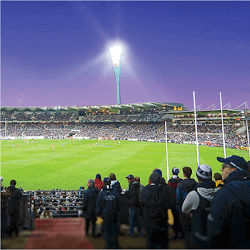 Football fans don’t have long to wait for the 2017 FFA action to kick off in Australia. The first A-League match of the year is scheduled for Monday, January the 2nd, when Melbourne Victory will play the Newcastle Jets at Victory’s third home, after AAMI Park and Etihad Stadium: Simonds Stadium in Kardinia Park, Geelong.

Victory needs a convincing win, if they are to stay within striking distance of Sydney FC, currently 10 points ahead of them at the top of the Hyundai A-League ladder. They are on track so far, on Wednesday thumping the Central Coast Mariners 4-1, with Marco Rojas scoring two goals.

The holiday game on Monday is sure to attract loads of football punters online, but record attendance for a Melbourne Victory match is also expected at the stadium. On January 08, 2016, there were 14,268 fans in the stands, but it couldn’t have been a joyful occasion for many of them, as Victory squandered a 3-0 lead to finish 3-3 against the Mariners.

Ticket sales for Monday’s match indicate that the crowd will be even bigger, and unless the Jets play way above the form they’ve shown so far this season, the Victory fans can expect a happier outcome.

The nationwide attention from football fans Geelong will enjoy on Monday night is good news for the city. Even if 20,000 fans turn up, they won’t fill Simonds Stadium. As a multi-purpose venue that hosts Aussie Rules matches much more often than FFA games, the stadium can currently accommodate 27,000, but that is operating at reduced capacity due to renovations.

When the new grandstand is completed, the capacity will rise to 36,000, making Simonds Stadium the largest regional arena in Australia; in other words, one that is not in a state or national capital. From 2018, the FFA Hyundai A-League will grow to include 12 teams, and possibly more in future. As Victoria’s second-largest city after Melbourne, Geelong is a strong contender to field one of the new teams.

Monday’s match is a perfect opportunity for the port city to show off what Simonds Stadium has to offer. Perhaps in the near future, FFA A-League matches in Geelong will star a local team, rather than the wealthy cousins paying a visit from the capital.