Newcastle Makes It To Premier League 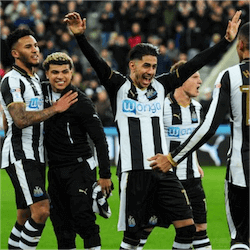 Newcastle United snagged a stunning victory in front of a crowd of over 50 000 fans. They faced off against Preston North End. It has been over a year since New Castle were relegated. Finally they have clawed back their promotion to the Premier League with a very convincing 4-1 victory.

The team also net over $160 000 000 in prize money. Christian Atsu scored for Newcastle, along with two sneaky goals by Ayoze Perez and a fantastic penalty from Matt Richie.

A Good Fight By Preston

In their defence, Preston did lose Paul Gallagher after he was sent off for handling on the line. Preston finished the game as a 10 man squad.

Perez scored the first goal of the night but soon Jordan Hugill from Preston scored an equaliser that stunned the home crowd into silence. Fortunately just before the first half, Christian Atsu took the game back from Newcastle.

Fighting For The Fans And The Glory

Matt Richie walked away with the man of the match award. He said after the match that the team was quite nervous when they stepped onto the grounds of Tyneside.

They knew they had a lot riding on this match and they didn’t want to disappoint their fans.

He said that they are disappointed not to be back at the top of the league, but they are hoping this victory will put some pressure on the Brighton team by winning their next matchup that will be taking place in Cardiff City.

Brighton is only 4 points ahead of Newcastle in the rankings and there are still two games left in the season.

Captain of the Newcastle United side, Jamaal Lascelles added to Ritchie’s sentiments. He said that their victory and now secured return to the Premier League is a bit overwhelming but very welcome none the less.

He joined Newcastle in 2016 and remained with the team despite their relegation. He cut two top players in the off season, namely Moussa Sissoko and Georginio Wijnaldum and purchased many new players to strengthen the squad which has clearly paid off.

He however could not confirm if he will be leading Newcastle in the Premier League next football season. His previous claim to fame was taking Liverpool to the 2005 Champions League and winning.