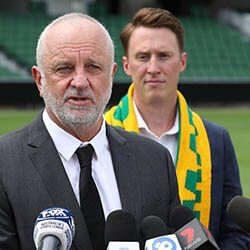 Australia has called for the age limit for Men’s Football games at the postponed Tokyo Olympic Games in 2021 to be changed. It should become an Under-24 squad so that the players who helped their teams to qualify this year can still take part.

James Johnson, Chief Executive Officer of Football Federation Australia, said that his organisation is interested in starting talks with the he Asian Football Confederation and the Fédération Internationale de Football Association and about this.

Recently, the decision was made to move the Tokyo Olympic Games from this July to next year due to the coronavirus COVID-19 pandemic. Australia’s infected total has risen to 2 799 and 12 people have died from it. In response, the Games have been put off, Tasmania has told its tourists to go home, and Queensland and South Australia are going pupil-free, except for children of essential workers.

This decision has seen concerns being raised across the sporting world however since some athletes will no longer be eligible to take part because of age restrictions or because they’ll lose fitness or form.

Turning Football’s format into an U24s game would mean that all the athletes who helped Australia qualify for the Tokyo Olympics in 2020 can still take part when it’s held in 12 month’s time.

This country, like many others, has been building up to the leading international sporting event for many years. Graham Arnold, coach for the national team, was also put in charge of the U23s when he got appointed in 2018.