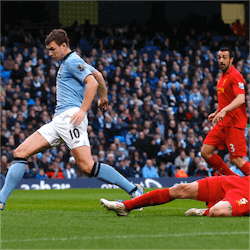 With both the summer transfer-window shenanigans and the latest FIFA World Cup 2018 qualifiers out of the way, Australian soccer fans betting on the 2017-18 English Premier League can get back to focusing on the club football action. Round 4 starts on Saturday with Manchester City at home to Liverpool.

City will be hoping for a return on their record outlay in the transfer window: both the total of £215-million, and their unprecedented-for-a-defender £52-million paid for Monaco full-back Benjamin Mendy. They’re betting favourites, at $0.90, with the Reds at $3.40, and a win would see City bump Liverpool from second place on the ladder. You can get your bets in online at Crownbet if you want to add weight to those wagering on the favourites.

Arsenal, Man U, Chelsea: All Odds-On

Among Saturday’s other matches, struggling Arsenal at $0.40 are heavily odds-on favourites at home to AFC Bournemouth, Chelsea are likewise odds-on away against Leicester City, and ladder leaders Manchester United are at a mere $0.50 to win away against Stoke City. Priced at $3.75 and up, any of the underdogs will be rewarding if there’s an upset. Southampton are also odds-on at $0.20 to beat Watford at home, with the visitors priced at $5.00

Betting sites are expecting more even matches in Saturday’s remaining two games. Brighton and Hove Albion are at $1.65, at home to West Bromwich Albion at $2.25. Tottenham Hotspur are hoping centre-forward Fernando Llorente, whom they just bought from Swansea, will do his magic in the air against Everton. Spurs, even playing away, are fancied at $1.15, while a home-side upset is at $2.80.

On Sunday, Burnley are at home to Crystal Palace. The Londoners, second from the bottom of the ladder, badly need the win in Lancashire, but betting sites are backing the home team, at $1.40, to take their second win in four matches. Palace are priced at $2.40.

Swansea City will host Newcastle United in the final match of Round 4. With Wilfried Bony back in their attack, Swansea are $1.40 favourites to clinch it, with the visitors offered at $2.35.