Socceroos Face Off Against Iraq in Tehran 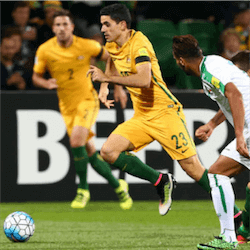 Socceroos Head Back to Tehran after 20 Years

It has been two decades since Australia last played in Tehran. While the city itself might not have seen many changes, the experience for the team certainly will. The only current Socceroos team member to be part of the infamous 1998 Wold Cup Qualifier games is long time physiotherapist Les Gelis.

There are very few Australians who need reminding of what happened in second leg of the qualifiers at the MCG. We all remember the feeling of elation when Australia was 2-0 up and cruising towards a place at the World Cup in France. This was until Peter Hore ran onto the field and cup up Iranian’s goal net, delaying play in the second half and ultimately leading to the demise of the Australian Team.

The pure horror and utter heartbreak of that fateful night has completely overshadowed the impressive draw on the first leg of qualifiers in front of 128, 000 male fans at the Azadi Stadium in Tehran. The one and only female present at the game was the wife Australia Soccer boss, David Hill. As the only Socceroos member to be present for the game, Gelis recalls the mayhem in the stands that night.

A Different Experience This Time Around

Word had spread that the Australian team had brought their own chef over with them. The Iranians took this as a dig at their food and culture. This caused Iranian supporters to throw hundreds of bread rolls onto the pitch in a scene of complete mayhem. Speaking to the press, Gelis said that this time, going back is a totally different situation. Back then it was hostile, this time around, things are passive and comfortable.

The key factor could be that the Socceroos will be facing Iraq and not Iran on neutral territory. The Iranian New Year means that millions of locals have left the city to attend family events in the country. This means that the city will have much less traffic, less air pollution and fewer worries for the team. Gelis said that today, the amount of prep work done before heading over is massive compared to how it used to be.

Backs then, things were all about finances with very little planning involved. Today far more attention is paid to the logistics and the sports science of such a setup. This time around, the Australian team will be holed up in a five-star Hotel overlooking Tehran’s northern city lights. Currently, there are no major security concerns for the team.