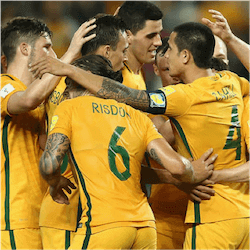 Socceroos coach Ange Postecoglou is no stranger to tough challenges. This is good news for Australia as the Asian Cup winners will face some difficult games in the upcoming Confederations Cup in Russia. Considered a “Trial Run” for the 2018 World Cup, the Confederations Cup is a prestigious football tournament for the six Confederations Champions as well as the host nation and the current World Cup holder.

The Confederations Cup already promises to be a serious test for the Socceroos as they were drawn to face South American Champions Chile as well as the World Cup Winners, Germany. If that wasn’t enough to cause Postecoglou to take a moment, their third group opponent will be the African Cup of Nations Champions Cameroon. After defeating Egypt 2-1, Cameroon made it the fifth time the team has won the Africa Cup of Nations sealing their place in the Confederations Cup.

Speaking to the press, Postecoglou said he welcomed the matchup with Cameroon. He said that Cameroon is considered to be one of Africa’s traditional football nations and will provide a fantastic challenge for his team. While they have three big matchups in the group stage, Postecoglou is happy that the Socceroos have another chance to compete for a title. He believes the experience will go a long way in their preparations for the World Cup in 2018.

Having studied the Egyptian team and Cameroon, Postecoglou was ready for whichever team eventually won the Africa Cup of Nations. According to him, they had scouts at the semi-finals and the finals. Cameroon now joins Australia, Germany and Chile in group B. The Socceroos will kick off their Confederations Cup campaign with a tough first game against World Cup Winners German on the 19th of June. They will then face Cameroon on the 22nd in Saint Petersburg followed by Chile on the 25th of June in Moscow.

Once the group stages are complete, the winners of group A will play the runners up from group B and vice versa. The four teams will then compete in the semi-finals and the two winners will then play the final while the runners up play for third place. Currently, the favourites to win the Confederation Cup is Germany at odds of $2,37. Australia find themselves sharing the seventh spot with Cameroon who both have odds of $21.00. The full list of betting odds for the Confederations Cup Teams are as follows: