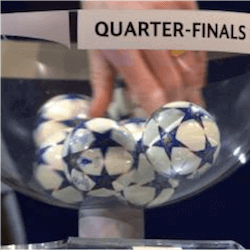 Australia’s betting fans following the 2016-17 UEFA Champions League now know their options for the April quarter-finals. The second leg of the Round of 16 saw some thrilling upsets and outlandish scores, so the action as the tournament enters its final stages could be just as unpredictable.

The first legs of two quarter-finals will kick off on Tuesday, 11 April. In Germany, Dortmund is at home to Monaco, after beating Benfica 4-1 overall in the Round of 16. Monaco, on the other hand, squeaked through to the last eight on away-goal superiority, after drawing 6-6 overall with Manchester City.

The Juventus-Barcelona match in Turin is likely to attract lots of punters too, after Barca’s history-making six-goal comeback against PSG to reach the final eight. They are undoubtedly the favourites. However, Juventus will be feeling just as strong after three unanswered goals against Porto in the last round, so it looks like it’s going to be a clash of the titans.

Supporters of English football will be rooting for Leicester City, playing their first leg away in Spain on Wednesday, 12 April. However, the English Premier League champions have been patchy since their triumph last year, and went down to Sevilla 2-1 in the first leg of the Round of 16.

They came back to win the second leg 2-0, but they have not had a convincing road to the quarter-finals. Even though players seem to be back in form since the controversial sacking of manager Claudio Ranieri, the solid professionalism and international strength of Atletico Madrid will prove a major challenge.

The other quarter-final first leg scheduled for 12 April is Bayern Munich at home to Real Madrid. Again, these are two top teams that will be very evenly matched; after beating Arsenal 5-1 twice in the last round, the German side may have an edge. But Real Madrid is also through courtesy of matching 3-1 victories against Napoli, so don’t expect them to roll over.

On Tuesday, 18 April, the second leg of the UEFA Champions League quarter-finals start, with Leicester at home to Atletico Madrid, and Real Madrid hosting Bayern Munich. On Wednesday, 19 April, Monaco is at home Dortmund, while FC Barca hosts their return match against Juventus.