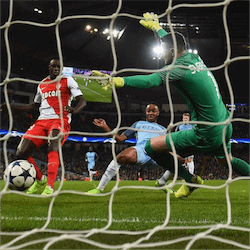 Bookies are offering Real Madrid at 13/8 to win the 2016-17 Champions League, after the Spanish side’s controversial win over Bayern Munich in the quarter-finals. The defending champions are thus the tournament favourites, but Australian punters shouldn’t ignore Juventus when the semis start on 2 May.

At 2/1, the renowned Italian side is capable of a serious challenge for the cup. A lot will depend on the draw for the semis, but football betting fans were still awaiting the draw announcement at the time of writing.

Juventus were firmly on track for the semis after beating FC Barcelona 3-0 in their first tie of the QF in Turin. They were by no means unassailable in the second tie, however, as Barca had proven with their four-goal comeback against PSG in the Round of 16, so the Juventus rematch attracted lots of interest.

Sadly for the Camp Nou faithful, a repeat miracle was not on the cards. Juventus held Barcelona to a 0-0 draw, to secure their place in the final four.

Leicester City’s Champions League Is Over

After their historic win of the English Premier League for the first time last year, Leicester City became many punters’ favourite underdog, as they continued their Cinderella journey all the way to the Champions League final eight. Sadly for their supporters, Atletico Madrid killed that dream in Leicester on Tuesday night.

City lost the first tie in Madrid 1-0, so they were hoping home-ground support could inspire them to make up the deficit. It was not to be: the rematch ended in a 1-1 draw, putting the Spanish side through to the semis.

Wednesday’s QF second ties also saw Monaco through to the final four. They beat Borussia Dortmund 3-1 at home, after winning their away leg 3-2. But the most controversial match of the quarter-finals was the final tie between the defending champions and Bayern Munich.

Bayern lost 2-1 at home in the first tie, but they returned the favour in Madrid and were 2-1 up at full time. But an 84th-minute red card for Arturo Vidal, which many believed undeserved, meant the Munich side was playing with 10 men.

Real Madrid capitalised, putting away three more goals in extra time, two of them from a seemingly offside Cristiano Ronaldo, to clinch their semi-finals berth. Bayern fans had every right to feel cheated.