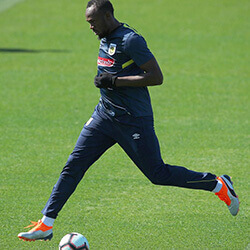 Usain Bolt, famous athlete and former Jamaican sprinter, has attended his first practice with a professional Australian football club. Bolt, who is often considered as one of the fastest men in the world, will be training alongside the Central Coast Mariners for the next few weeks.

Bolt, who attended a joint press conference along with coach Mike Mulvey told reporters that the Mariners had decided to give him the chance to practice with them, and that he was grateful for the opportunity. He added that he’s attending the practice to make both the team and himself proud.

The Olympic sprinter is aiming to break into professional football, and officially ended his extremely successful running career at the end of last year. The Jamaican has also trained with German club Borussia Dortmund, Norwegian club Stromsgodset, as well as South African club Sundowns.

The hope of the Mariners is to turn Bolt into an A-League player and get him ready for the beginning of the 2018-19 season that’s set to start at the end of October. The club has maintained that he is allowed to stay and train indefinitely in order to prove his mettle as a footballer.

Mulvey added that although Bolt was nervous during his first session, he’s a fantastic athlete and the club was delighted to host him.