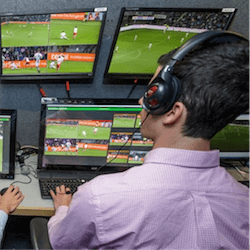 When the 2018 African Nations Championship kicks off in Morocco on January 13, it will achieve the distinction of being the first tournament in Africa to make use of VAR, or the video assistant referee.

The video-review technology, already in widespread use in world cricket and rugby, has been approved to help out on-field refs in four specific instances by the International Football Association Board, which polices the rules of the game.

Those instances are: to review any alleged violations in the build-up to a goal, to review penalty decisions, to review immediate-red-card decisions (but not second-yellow-card dismissals), and to reverse mistaken identity in awarding a yellow or red card.

VAR will be in use at all four of the Moroccan venues hosting the tournament, which runs from January 13 to February 04 in Tangier, Casablanca, Marrakesh and Agadir.

The Homeboy’s African Cup of Nations

With the introduction of VAR for the 2018 African Nations Championship, the stay-at-home stars have gone one-up on players cracking international swag, as they get to play in the first football competition on the continent to make use of the technology.

For some reason, world football has not embraced VAR with the enthusiasm that rugby and cricket did years ago, although that attitude looks like it’s changing.

After some tentative trials starting in 2016, Australia claimed the honour of being the first country to use VAR in a professional league game on April 07, 2017. The VAR system was debuted in an A-League match between Adelaide United and Melbourne City, but it wasn’t required to review a decision all night.

The following day, with Sydney FC across the Tasman playing Wellington Phoenix, the VAR system made its first intervention in a professional league match, identifying a handball to give Sydney FC a penalty.

So far, VAR has been used to improve football tournaments in the USA, Germany and Portugal, among others, and FIFA is looking at the 2018 African Nations Championship as a trial run for the 2018 Football World Cup in Russia, at which the VAR system will also be in use for the first time.