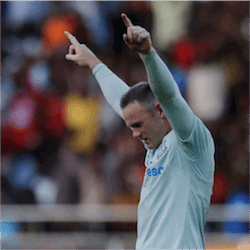 Rooney Back with Everton after 13 Years

Wayne Rooney has officially confirmed his return to Everton Football Club. After leaving Everton in 2004 to join Manchester United, Rooney picked up every major honour in European soccer. While he was playing for Man Untied, Rooney scored a total of 253 goals, a number far higher than any other player in the history of the team. With his help, the team won the League Cup three times, the FA Cup Once, the Premier League five times, the Champions league once and now the Europa cup last season.

While a reunion with Everton has been on the cards for years, it finally came this week when Rooney signed a two-year contract at Goodison Park. Speaking to the press, Rooney said that it was a great feeling being back. He said he could not wait to meet the team and get back onto the pitch.

For years, Rooney has said that if he ever entertained the notion of playing for another Premier League club, it would be Everton. For Everton though, the club will not be seeing the same energetic and dynamic player who left back in 2004. Now in his early 30’s, Rooney is in the twilight of his career and only became available after he dropped out of both Man United and the England national team that he captained.

Rooney Still Passionate About the Game

Rooney’s passion for the game has never diminished though. After accepting a significantly reduced status for on the England and Man United team, a return to Everton could be the fresh start he was looking for. It is even possible that this could be the catalyst that will get Rooney back in the England side in time for the World Cup next year. Once again, Rooney will play a central role for Everton under the guidance of coach Ronald Koeman.

Rooney has said that he returned to Everton because he believed the coach is building a team that can really win something. He said he is keen to play his part in making this a reality for a team he has supports since he was a boy. While Everton is in the process of selling Romelu Lukaku to Manchester United, they have recently signed centre back Michael Keane, goalkeeper Jordan Pickford, striker Sandro Ramirez and midfielder Davy Klaassen, all this offseason.

According to reports, Everton’s major shareholder Farhad Moshiri wants to take the team to a better finish than least season’s sixth place. The goal is to achieve silverware, something the team has been searching for, ever since they won the FA Cup back in 1995.