Wrist Injuries as Dangerous as Concussions in AU Rules Football 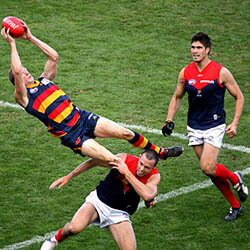 When people think about player injuries from Australian Rules Football games, head injuries and the long-term effects of concussion are what usually spring to mind. They may also imagine the potentially lengthy recoveries required for injuries to ankles, hamstrings, and shoulders.

But recent research has found another leading cause of trauma serious enough to send players to the emergency room, and it’s those related to hands and wrists!

Australian Rules Football involves a mix of aggressive tackling, ball-handling skills, jumping, kicking, quick changes in direction, running, and sudden, forceful collisions. Its unique rules and incredible physical demands expose its players to a variety of unique injuries. Because it’s a 360° game it can see fingers, hands, and wrists being crushed, jarred, kicked, and pulled.

Although preventing this kind of trauma is challenging, it’s not impossible. One has to take into account the game’s fast pace, the number of players on the pitch, and the oval ball’s unpredictable bounces, but there are strategies that can help reduce the impact and frequency of injuries as well as the costs associated with treating them.

One of these is starting to train players from a junior, grassroots level about the best way to handball, mark, and tackle. They need to be taught that catching their fingers in a teammate or opponent’s clothing can lead to them being dislocated and that handballing should be done without the thumb in the palm. Fingers can also be held to the sky and their bodies behind their hands when they’re marking.