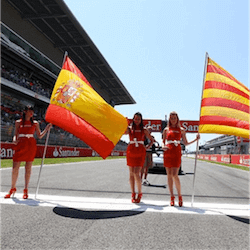 With the 2017 Formula 1 season firmly underway, punters, sports fans and motor heads can look forward to another action-packed season of fast-paced racing. The Australian Grand Prix kicked off the season in style with Sebastian Vettel taking pole position and bagging himself the maximum 25 points for the race. Lewis Hamilton picked up 18 points for second place while Valetteri Bottas came in third and Kimi Raikkonen in Fourth.

The next race on the Formula 1 calendar is the Chinese Grand Prix in Shanghai. For most racing enthusiasts though, the race to look forward to is the Spanish Grand Prix in Barcelona on the 12th of May. The Formula 1 teams are no strangers to the Barcelona circuit. Previously known as the Circuit de Catalunya, drivers have been racing on this pristine circuit since 1991. The teams also conduct extensive testing at the track, making it one of the most competitive races on calendar.

While familiarly to the circuit does have its advantages, this does not mean the Barcelona circuit is not challenging. In fact, the mix of high and low speed corners and bumpy track surface make it one of the most mechanically and physically challenging of them all. Teams need to pull out all the stops as tyre wear is a major factor on this course and varying winds can mean the optimum setup is crucial.

From a spectator’s point of view, the Barcelona track is one of the best. Elf corner is one of the finest places to catch the action marking a significant point for overtaking opportunities. As far as the drivers are concerned, “New Holland”, the collective term for the final two turns has to be considered the biggest challenge of the F1 season. A fast exit out of the turns is essential for the drivers to maximise their speed down the straight to the finish.

The 2017 Spanish Grand Prix will mark the 25th time Barcelona has hosted the race. Michael Schumacher holds the record for the most race wins on the circuit with a total of six victories. The current lap record was set by Kimi Raikkonen in 2008 in a time of 1:21.670. Drivers that have all won in Barcelona include Lewis Hamilton, Felipe Massa Sebastian Vettel, Fernando Alonso and Kimi Raikkonen.