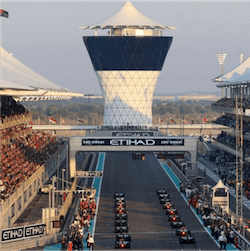 The final grand prix of the Formula 1 season is more than enough excuse for a big celebration, and Abu Dhabi is obviously conscious of the responsibility the Abu Dhabi Grand Prix brings with it. There’s no shortage of entertainment for those who want more out of the weekend than roaring engines, smoking tyres and the heady whiff of fuel.

It’s also the perfect opportunity for the UAE city state to show off its modern, urban, party-loving side, and explode a few of the stereotypes online betting fans around the world might have about the Persian Gulf as a funspot.

The festivities kicked off early with a Thursday night concert at the du Arena, and it gave F1 fans in town for the big race a thirst for more. They’ll expect some great times in the after-race concerts to follow, featuring Pink, J Cole and Mumford & Sons.

Thursday’s event was no less stellar, headlined by DJ and producer Calvin Harris. Famously teetotal in an industry renowned for its excesses, Harris is probably the perfect act for a gig like this. Styled the highest-paid DJ in the world, he certainly qualifies for the bling lifestyle that’s so important to the emirate’s smart set, without any messy alcohol issues to offend religious sensibilities.

He certainly proved you don’t need to drink to have a good time on his elevated stage at the du Arena. He started his set with his crowd-pleasing Florence and the Machine collaboration, Sweet Nothing, at 9pm, then threw in a parade of hits like Summer, Despacito, How Deep Is Your Love and Rihanna’s This Is What You Came For.

Aussie Talent Also Gets a Shot

The 33-year-old’s playlist was accompanied by an impressive mixture of lighting, laser, fire and smoke that transformed the du Arena. Aussie DJ Generik also got his shot at wowing the crowd and social media as the opening act.

Earlier on Thursday, at The Village in the du Arena hosted the grand finale of the third annual Emerging Talent competition, which gives local talent a chance to shine in the world spotlight. It was won by gruff-voiced singer-songwriter Danny Afridi.