Alonso Out of Monaco Grand Prix 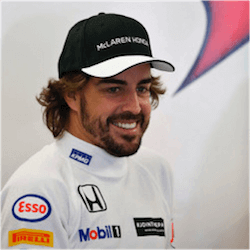 The 2017 Formula 1 Championships are already shaping up to be a battle royal. Sebastian Vettel won the opening race of the season, the Australian Grand Prix, with Lewis Hamilton second. At Sunday’s Chinese Grand Prix in Shanghai, the positions were reversed.

So both drivers are currently topping the ladder neck-and-neck on 43 points each, adding an extra frisson to this Sunday’s Bahrain Grand Prix. It’s still early days yet, but this season looks like it could turn into an epic tussle between Mercedes and Ferrari.

Hamilton’s Mercedes teammate, Valtteri Bottas, is fourth on the ladder, with 23 points from a third and a sixth place. Vettel’s teammate for Ferrari, Kimi Raikkonen, is fifth, with his finishes in fourth and fifth in Melbourne and Shanghai netting him 22 points.

Dutch wonder-boy Max Verstappen is third on the ladder with 25 points, after finishing fifth in Australia and third in China. The fact that Red Bull-Tag Heuer is also third in the constructor’s championship with 37 points, despite Verstappen’s Australian teammate Daniel Ricciardo not finishing in Melbourne, indicates that they could remain a serious threat.

After the Bahrain Grand Prix, the Russian Grand Prix in Sochi follows on 30 April, and the Spanish Grand Prix in Barcelona takes place on 14 May. However, many Australian betting enthusiasts are more interested in the legendary Monaco Grand Prix on 28 May.

Lewis Hamilton won last year, so he will be gunning for two in a row this year. However, Vettel won the race on the famed street circuit in 2011, so he will be equally pumped for a second victory.

In surprise news, Fernando Alonso is out of the McLaren-Honda team for Monaco. Alonso, Formula 1 champion in 2005 and 2006, is now chasing motor racing’s Triple Crown, which will require him to win both the Indy 500 and the Le Mans 24-hour.

This year, he has set his sights on the Indy 500, with the intention of trying Le Mans at a later date. His withdrawal means that fans of Jenson Button might see the British driver come out of retirement for Monaco, as he is still the reserve driver for McLaren.