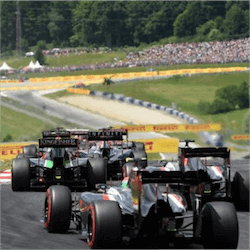 The Austrian Grand Prix, scheduled for Sunday, 9 July at the Red Bull Ring in Spielberg, is the first of three Formula 1 races in a jam-packed July, before the season takes a month’s break. The ninth grand prix of 2017, it may also see the eternal rivalry between Ferrari and Mercedes turn decidedly bitter for the rest of the season.

The star drivers for both teams are still aggrieved by their ugly spat at the Azerbaijan Grand Prix last Sunday. Lewis Hamilton has the rules in his favour: no matter what the provocation, it was unconscionable of Sebastian Vettel to deliberately swerve into him while they were following the safety car in Baku.

However, the Ferrari driver is not without reason to feel hard done by, either. His brain-fart was a reaction of pure frustration, after Hamilton appeared to deliberately ‘brake-check’ him during the slow lap, causing the German to plough into the back of the Mercedes. His hot-headed retaliation not only cost him a 10-second stop-go penalty in Baku, but also three demerit points on his FIA superlicence.

Vettel in Danger of Suspension

If Vettel loses another three points, he will be suspended for one race, so his main task at the Austrian Grand Prix will be to ensure that his British rival doesn’t goad him into any more acts of lunacy. Despite finishing fourth in Azerbaijan, Vettel is still top of the drivers’ championship ladder, with 153 points.

However, Hamilton, who was fifth in Baku, is on 139 points: well within striking distance of the top spot, especially if Vettel is forced to sit out a race. With Mercedes already ahead in the constructors’ championship, it’s the last thing Ferrari needs.

With Hamilton and Vettel likely to be focused exclusively on each other at Spielberg, Red Bull-Tag Heuer drivers Daniel Ricciardo and Max Verstappen will be looking to impress on their home circuit. Ricciardo, fresh from his first win of the season in Azerbaijan, is currently fourth on the drivers’ ladder, with Verstappen in sixth, and Red Bull lying third in the constructors’ championship.

That’s pretty impressive, when you consider that their cars have let them down six times so far this year: Ricciardo has had to retire twice, and Verstappen four times. So both will be itching to exploit whatever rivalries they can, to secure a win in Austria.