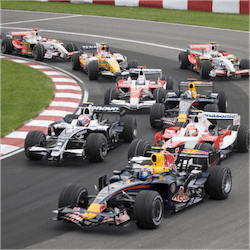 Almost halfway through the 2017 Formula 1 season, Australian punters can look forward to a period of intense betting action from now until the end of July. Over the next six weeks, before the season takes a four-week break at the height of the European summer, there are no less than four races scheduled.

This Sunday sees the first edition of the Azerbaijan Grand Prix, as the European Grand Prix is now known, after finding a permanent home in Baku. Two weeks from Sunday, on 9 July, the Austrian Grand Prix hits the Red Bull Ring in Spielberg, Styria.

The British Grand Prix follows at Silverstone a week later, and the Hungarian Grand Prix in Budapest on 30 July is the last race before the August break. Ferrari’s Sebastian Vettel and Mercedes’ Lewis Hamilton are locked in combat at the top of the drivers’ championship, with both their teammates close behind, so all four races have plenty to offer online betting enthusiasts.

Azerbaijan is the only Grand Prix on the current calendar that Hamilton has not won; unsurprisingly, as this year marks its debut. The British driver is also currently 12 points behind Vettel on the drivers’ ladder; the German leads the championship with 141 points.

So Hamilton needs to win on Sunday to achieve a sweep of all current titles, and also to improve his standing against Vettel. He will also be extremely keen to win the Austrian Grand Prix a fortnight later, as he is the reigning 2016 champion, and a second consecutive win will put him on a par with the likes of Michael Schumacher and Nico Rosberg. Alain Prost holds the record for three Austrian Grand Prix victories, but again, only two of them were consecutive: he won in 1983, 1985 and 1986.

Vettel and Hamilton have an extraordinary record so far this season. With the exception of the Russian Grand Prix in April, won by Valtteri Bottas, with his Mercedes teammate fourth and Vettel second, the two senior drivers have alternated wins in the other six races so far.

Vettel won in Australia, Bahrain and Monaco, while Hamilton took the chequered flag in China, Spain and Canada. If that pattern continues, Vettel will be triumphant in Baku, and Hamilton will get his Austrian double. In any event, both races are going to be extremely hard-fought.