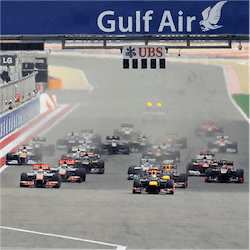 In a typically calculated, calm performance, Sebastian Vettel coolly took the Bahrain Grand Prix on Sunday, finishing 6.660 seconds ahead of Lewis Hamilton. The win puts the German 2-1 ahead in the 2017 Formula 1 drivers’ championship, after he won the Australian Grand Prix and finished second to Hamilton in the Chinese Grand Prix.

Although he started third on the grid at the Bahrain International Circuit in Sakhir on Sunday, behind Hamilton and the Brit’s Mercedes teammate Valtteri Bottas, Vettel’s surprise early pit-stop on lap 11 allowed him to take the lead and hold it unchallenged for the rest of the race.

Vettel’s victory also confirmed Ferrari as a serious threat to Mercedes in this year’s constructors’ championship. The Mercedes cars are doing well in qualifiers, as evidenced by Bottas’ pole position in Sakhir and Hamilton’s start second on the grid. The Ferraris are setting the pace during actual races, however, and so far their pit-wall decisions have looked more astute than the Mercedes’ crew’s.

Rumblings Further Down the Ladder

Sunday’s result, a replay of the Australian Grand Prix finish in March, saw Ferrari bracketing Mercedes in the top four: Vettel first, Hamilton second, Bottas third and Vettel’s teammate Kimi Raikkonen fourth. However, Bottas would not have enjoyed being ordered twice by his pit-wall to yield to Hamilton during the Bahrain event.

It was the correct strategic decision, as Hamilton’s pace was better throughout the race, but after two thirds and a sixth in Shanghai, the Finn will be itching to prove that he’s no “second driver”. Likewise, his countryman Raikkonen will want to improve on the two fourths and a fifth he has managed so far. With the Ferraris nimbler at passing that the Mercedes this year, he has every chance of doing so.

Australian driver Daniel Ricciardo could also still surprise. He started fourth on the grid in Bahrain, ahead of Raikkonen, and finished fifth, despite being held up by Hamilton in the pit lane. He’s currently 6th on the 2017 drivers’ championship ladder with 22 points, three points behind Red Bull teammate Max Verstappen.

The Dutch youngster didn’t finish on Sunday, retiring after he lost his brakes in lap 11. However, if the Red Bull-Tag Heuer team can get their cars sorted out, both Verstappen and Ricciardo are liable to get Australian punters excited in the remaining races of the season.